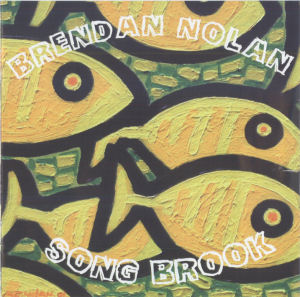 8. Whatever You Say, Say Nothing (Colum Sands)

11. The Hackler from Grouse Hall (Traditional)

Cover Painting "Mellow Fish" by my cousin John Nolan. John is a well-known Irish artist. His work has been exhibited at many exhibitions throughout Ireland, Britain and Europe. For more on John's art please visit his website: www.nolanart.com.

My gratitude to Barney Beninger at Fast Forward for another easy-going recording experience. To Jonathan for his preparation and wonderful playing. Thanks to Bob for coming over from Fort Lauderdale and putting down some nice tracks on several of the songs. I was glad to find Al Fuller to add his harmonica to 'Shady River'. To Mark -- I told you I'd find an Irish song that could feature the tuba -- I told ya! I greatly appreciate the kind help of Jim Flanagan with information on the songs 'Sullivan's John' and 'Dan O'Hara'. I can't say enough about my recording experience with Danny Ellis. What a great attitude and a wonderful ear you have. You breathed some new life into a few of these songs by adding not just your voice but several instrumental suggestions that made all the difference. I hope we have the chance to work together again.

And for the love and support of my wife Maureen. She puts up with me during these projects and has always supported this somewhat unorthodox road I've taken down through the years.